On Monday, October 24, 2022, the FBA Maryland Chapter’s Fireside Chat series featured United States District Judge Julie Rubin.  Judge Rubin joined the federal bench after having previously served as an associate judge on the Baltimore City Circuit Court.  Before that, she was a trial lawyer in private practice in Baltimore. Judge Rubin never let her accomplishments go to her head.  She emphasized the importance of never taking herself too seriously.  Lawyers could be brilliant and hardworking, while also being down to earth and personable.  Those are traits she noticeably displayed throughout her chat.  Judge Rubin also discussed the value of mentorship.  She shared the insight other judges gave her when she first took the bench.  Some lawyers may argue forcefully and passionately, but she is guided by the law and facts.  She found it equally important to help the next generation of lawyers.  Maryland Chapter member Jamar Brown, who led the discussion, provided a good example.  Jamar had his first jury trial before Judge Rubin in the Baltimore City Circuit Court.  Jamar sought Judge Rubin’s feedback after that trial, and she has been a close mentor ever since.  Along those same lines, Judge Rubin shared with the audience her practice preferences and tips. Finally, Judge Rubin gave a window into her life outside the law.  She is an avid runner.  Running, she admitted, was both a passion and necessity—because her other passion is food.  It was a pleasure to hear from Judge Rubin, and she is a welcomed addition to the bench. 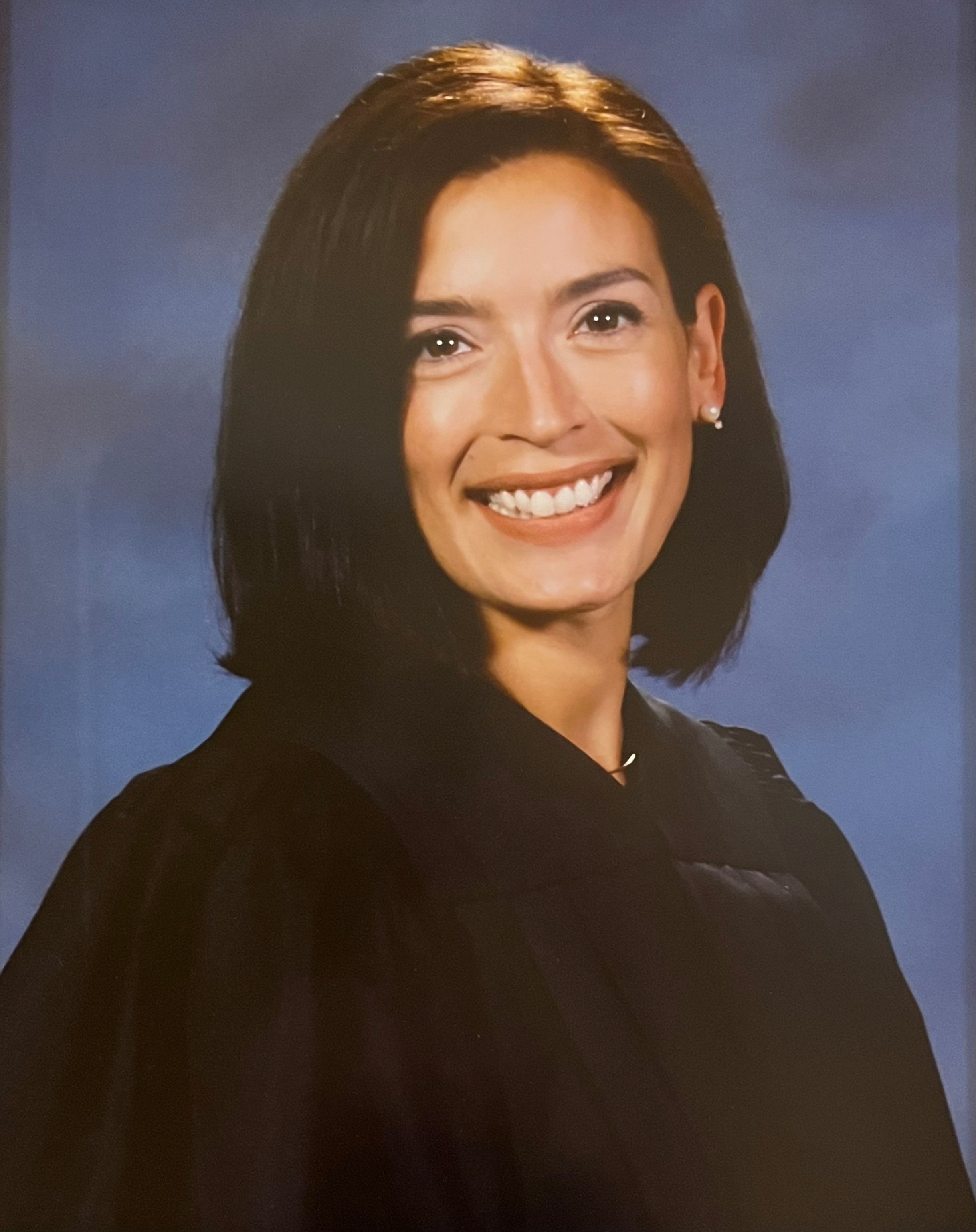 In the latest installment of the Maryland Chapter’s Fireside Chat series, we had the great pleasure of speaking recently with United States Magistrate Judge Ajmel Quereshi.  Judge Quereshi spoke about his background as a public interest lawyer, providing insight into his time as a Skadden Fellow with the American Civil Liberties Union of Maryland, Director of the Howard University School of Law Civil Rights Clinic, a Wasserstein Fellow at Harvard Law School, and a Rappaport Fellow with Boston College Law School.  These experiences, Judge Quereshi observed, provided a foundation for his career in public service, as well as an opportunity to advocate for underserved communities.  Judge Quereshi followed these experiences by working as staff counsel at the ACLU’s National Prison Project, where he advocated for a population he described as often outside our public sphere of service.  Judge Quereshi then served the NAACP Legal Defense Fund, where he served as Senior Counsel, until joining the Court.  Judge Quereshi described how these opportunities allowed him to broaden his advocacy skills, while engaging with clients on issues of both individual and systemic justice.

Judge Quereshi spoke with candor, humility, and frankness.  He described how his parents and childhood community instilled in him a strong work ethic and how he has carried that forward.  In every community in which Judge Quereshi has lived and worked, he described how he has tried to dedicate himself to being a voice for positive change.  Mentors have been extremely significant in Judge Quereshi’s career, from judges with whom he worked to colleagues and senior lawyers.  As Judge Quereshi’s career has developed, he in turn has sought to provide guidance and mentoring to other lawyers.  He described how he views our legal system as a critical tool for achieving our ideal of a just and fair society.   While Judge Quereshi modestly deferred any discussion of his intended legacy, the qualities he brings to the bench provide the background, temperament, and skills needed for a career that will enrich our Court and serve litigants with impartiality, wisdom, and justice.

We welcome Judge Quereshi to the bench and look forward to his years of service to come. 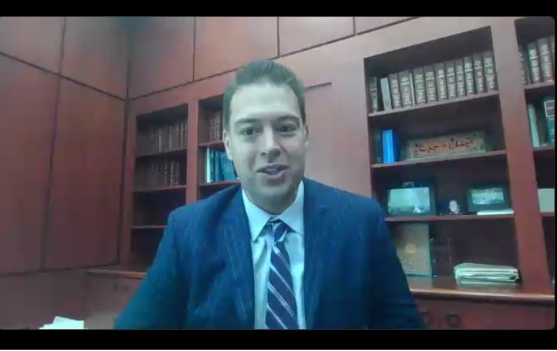 We are pleased to announce the Summer 2022 edition of the FBA Maryland Chapter Newsletter.  Click below to read about our latest Chapter Events and Programs: 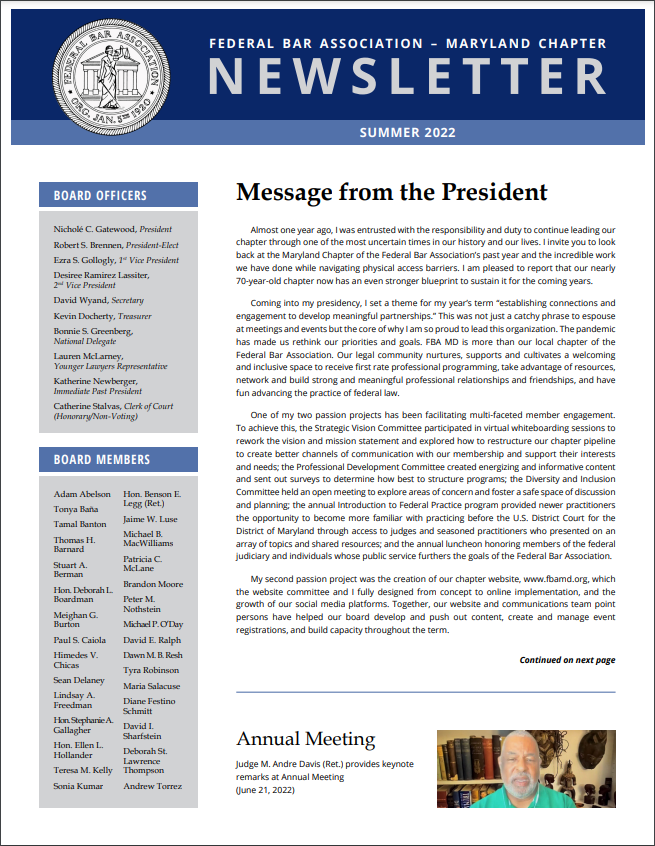 On Tuesday, June 22, 2022, the Chapter virtually held its annual meeting which was open to all FBA members.  The Chapter was honored to hear opening remarks from Judge Andre M. Davis (Ret.) who discussed the role of the prosecutor and defense in criminal proceedings and their responsibility to themselves and society at large as we navigate the historical criminal undertaking that our nation is seeing.  He also discussed the importance of not politicizing the bench and its impact for civil practitioners.

In her final board meeting as the FBA Maryland Chapter President, Nicholé C. Gatewood highlighted the Chapter's many accomplishments during her term including:

She also listed the many Chapter events and program series including:

We thank Nicholé for serving as the Chapter's visionary, project manager, principal, and team captain during her term.